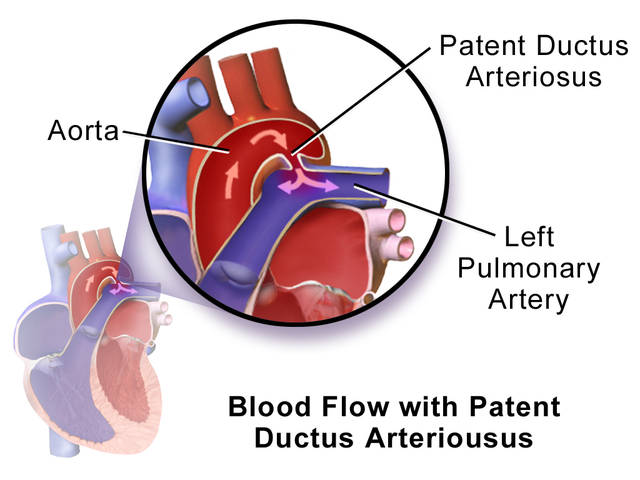 Patent ductus arteriosus (PDA) is a common congenital heart defect in dogs, and a genetic predisposition has been documented in toy and miniature poodles, German shepherds, collies, Pomeranians, Shelties, Maltese, English springer spaniels, Keeshonds, and Yorkies. The ductus arteriosus is a communication between the two large arteries leaving the heart (the aorta and the main pulmonary artery).  It is a normal structure when a puppy is in utero, but it should close completely a few days after a puppy is born.  When it remains open, blood is allowed to shunt (flow) between the aorta and pulmonary artery after birth.

The more common form of PDA is known as a left-to-right PDA – blood shunts from the aorta (the large artery carrying blood from the heart to the body) to the pulmonary artery (the artery carrying blood from the heart to the lungs).  Over time, this leads to enlargement of the left side of the heart and eventual congestive heart failure (pulmonary edema – fluid accumulation in the air spaces of the lungs). Another potential consequence of PDA is an abnormal heart rhythm (arrhythmia). In some cases, uncorrected PDA may lead to pulmonary hypertension (a condition characterized by increased pressure within the blood vessels traveling to and within the lungs), which can cause the direction of blood flow across the PDA to reverse. This allows poorly oxygenated blood (meant to go to the lungs to pick up oxygen) to mix with oxygenated blood going to the abdominal organs and the back part of the body. This may result is increased numbers of red blood cells with the blood, causing it to become too thick/sludgy (polycythemia). Once the flow across a PDA has reversed, correction becomes extremely risky and is usually not performed.

Closure of a left-to-right PDA is recommended as soon as possible after diagnosis to prevent development of left sided CHF and other complications of uncorrected PDAs. Mortality is high in dogs with uncorrected, significant PDAs, with more than 50% dying before 1 year of age (either due to congestive heart failure or sudden death, presumably due to arrhythmia). In dogs in whom a PDA has already resulted in congestive heart failure, closure is recommended as soon as the dog is an acceptable anesthetic candidate. It should be noted, however, that even with successful closure of the PDA, the pet’s heart may not reverse remodel to the point that he/she can be completely weaned off heart failure medications. However, the short-term prognosis in pets with a PDA and congestive heart failure is undoubtedly poor without closure.

Closure may be performed via an interventional catheterization and placement of an occlusion device called an Amplatz Canine Ductal Occluder (ACDO). Advantages of this procedure include its minimally invasive nature and resulting short recovery time.  Disadvantages include longer anesthesia time and the risk of migration of the ACDO after placement.  Although uncommon, if the device cannot be placed in the PDA (which may occur in some dogs due to the shape of the PDA) surgery will then be required to close the PDA. Advantages of surgical PDA closure are shorter anesthesia time and no risk of device migration.  Disadvantages include its more invasive nature, longer post-operative recovery time, higher risk of bleeding, and potential of recanalization (re-establishment of blood flow through the ductus), although this is not common.

Dogs with PDA should not be bred due to the risk that their puppies will also be affected.