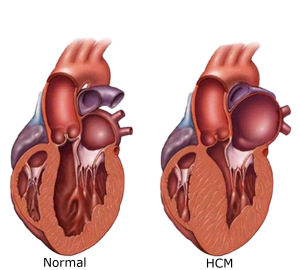 Hypertrophic cardiomyopathy (HCM) is the most common acquired heart diseases in cats. HCM is a primary disease of the heart muscle that causes the walls of the ventricles to become abnormally thickened (hypertrophied). HCM is diagnosed when other causes of left ventricular wall thickening, such as hyperthyroidism (elevated thyroid hormone levels), systemic hypertension (high blood pressure), aortic stenosis, and others, have been ruled out. A genetic mutation leading to HCM has been identified in Maine Coon and Ragdoll cats, and a genetic predisposition is suspected in other purebred and mixed breed cats. Cats are usually middle aged to older when they are first diagnosed, however this disease can be found at any age. Many cats with HCM do not show any clinical signs of heart disease, and the first clue that something is abnormal is the presence of a heart murmur, an extra heart sound (gallop rhythm), or evidence of heart enlargement on chest x-rays.

As HCM progresses, the structure and function of the heart is altered. Importantly, the left ventricle is unable to relax normally. The thickened walls of the left ventricle become less flexible/compliant, which interferes with the ability of blood to flow from the left atrium into the left ventricle. This abnormal relaxation and inability to stretch may ultimately result in a build-up of blood “upstream” of the left ventricle – namely the left atrium and the pulmonary circulation. As the blood backs up, fluid is forced from the small blood vessels in the lungs (pulmonary capillaries) into the lungs and chest cavity causing pulmonary edema and pleural effusion, respectively (commonly called “congestive heart failure,” or CHF). Congestive heart failure is an emergency that will lead to death if not treated promptly and appropriately. If CHF is suspected based on history and physical exam findings, further diagnostics to confirm the diagnosis include chest x-rays, and possibly thoracic ultrasound, echocardiography, and measurement of cardiac biomarkers in the blood. Based on the severity of the heart failure, as well as the presence/severity of any concurrent diseases, therapy may include supplemental oxygen, sedation (to ease the anxiety associated with difficulty breathing), injectable or oral diuretics (to draw fluid out of the air spaces in the lungs), thoracocentesis (manual removal of fluid in the chest cavity to allow the lungs to expand), and occasionally injectable or oral inotropes (medications that increase contractility of the heart). Many cats require hospitalization for care and monitoring for 48-72 hours after CHF is diagnosed. Long-term care often involves oral medications and monitoring of kidney function and electrolytes via blood work.

The prognosis for cats with HCM is highly variable with many asymptomatic cats living a normal life span. Studies have found that cats with more significant disease that progress to congestive heart failure have reported median survival times between 1-2 years.

In some cats, the thickening of the heart muscle leads to arrhythmias and can result in sudden death, although this appears to be relatively less common in cats than in people. If a significant arrhythmia is documented on EKG (either in the hospital or at home using a Holter monitor), an anti-arrhythmic medication may be recommended.

A minority of cats with HCM can experience cardiogenic arterial thromboembolism in which a blood clot forms in the heart and travels to an artery. The clot most commonly lodges in the arteries supplying the back legs, leading to sudden weakness or paralysis, severe pain, and often, death. Occasionally the clot will travel to the artery supplying a single front leg, leading to pain, limping, or paralysis of the affected leg. A large blood clot, or one that occludes blood flow to a vital organ, may lead to sudden death. The prognosis for cats that have a single hind limb or forelimb affected can be fair, but the prognosis when both hind limbs are affected unfortunately is poor.

Unfortunately, no medication has been conclusively shown to prevent or slow disease progression in asymptomatic cats with HCM. As such, cats with HCM but no evidence of significant cardiac enlargement are usually not started on any medication. Cats that do have left atrial enlargement or severe thickening of the left ventricle (and will tolerate an oralmedication) may be started on therapy depending on the specifics of the case.